Hi guys! One of my most anticipated reads for 2017 is Golden by K. M. Robinson, and she is one of the closest authors I know! I am so glad that I have the opportunity to interview her! Golden is coming exactly in one month on March 28th with Snowy Wings Publishing, and you should definitely read it! I know I’m going to soon! Hope you enjoy this interview!

1. How you would pitch Golden to me if you had one shot to convince me to read it? 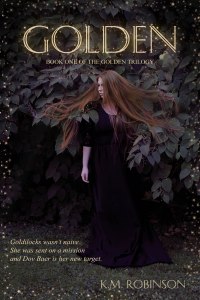 What if I told you that Goldilocks wasn’t innocent…or a child…or naïve? What if I told she didn’t just wander into the bears’ house…or that the Baers weren’t actual bears?

Now what if I told you Goldilocks was actually highly trained and sent on a mission to destroy the Baers by getting close to the youngest…and if her deception is uncovered, they will all be in danger?

Goldilocks has the ability to take down an entire society…until Dov Baer messes those plans up. Now that Goldilocks is forced to betray everyone, not even she has hope of surviving.

This is not the Goldilocks you thought you knew.

2. Why do you love writing? When did you first have a love for writing, and how was it formed?

I enjoy writing because it lets me tell the stories I was looking for but couldn’t find. I like to consider myself a creator of new worlds, both in my writing and in my photography, so creating these stories gives me the opportunity to assemble these places that wouldn’t otherwise exist. I love that creation…they are something that never existed and couldn’t be built by anyone else. It’s amazing.

3. Who are your favorite authors, and which ones have had an impact on you? Who has affected your writing style the most?

This is a hard one! I have so much admiration for my friend, Lisa Brown Roberts. She writes YA contemporary romance, which isn’t a genre I typically prioritize when reading, but this woman is so skilled and so funny that I would drop anything to read her books. She transports me in her stories and makes the world we live in so much more fascinating, which is so incredibly hard to do. I can not praise her work enough.

My other favorites are actually in the question below, so I’ll let you skip down to check that out.

As for influence, I would say Veronica Roth had a big impact on me because she gave me the freedom to have “real” endings. When things happen within a story, I want to see the consequences play out…not some happily ever after where actions go unpunished and no one gets hurt. All actions have consequences, so when that doesn’t follow through in a story, that annoys me. I love a happy ending, I really do, but there can be happiness after some scars too. She gave me permission to follow through and create real endings that aren’t always wrapped in a pretty box with a sparkly bow.

Retellings and dystopians are my favorite. I love books like Divergent and The Hunger Games. Branded by Abi Ketner and Missy Kalicicki is one of my favorites. I also like Kierra Cass’ The Selection Series because I’m such a huge fan of princess stories and love stories.

5. What do you do when you’re not writing? Is writing a part-time or full-time job?

When I’m not writing, I am a professional fine arts conceptual photographer, and I educator authors, book reviewers, and entrepreneurs through Reading Transforms on marketing, branding and social media strategy. There’s a lot of overlap in all of those things (surprisingly) so together it’s full time, but if I were to take writing out and look at it separately, it would definitely be a part time thing at the moment, only because this is my first book and I won’t make enough money to go full time until I have at least a handful of books out.

6. Why did you choose to make this book a retelling of Goldilocks instead of another fairy tale? What drew you to Goldilocks and the Three Bears?

But in all seriousness, I’ve been obsessed with Goldilocks since I was young because we have the same hair.

When I would walk into a store and when I found myself in the hair care aisle, I would match my color to the colors of hair dye. It always matched ‘gold” or “golden” and it was never that white-blonde color people assume Goldilocks’ hair is. I was always annoyed that she was portrayed as a white-blonde, when she clearly had my hair color (as named by the hair dye section of the store.)

For years I thought about her and never really cared for the story I was presented with. I’m a fan of “the real story behind the story,” so I was obsessed with knowing why she was in the bears’ house. Eventually I decided to actually write the story, made the bears into a family of Baers, shifted their roles around a bit, and then I gave Goldilocks a dangerous reason for being there, and suddenly I had my answers.

7. If you could be any fairy tale character, who would you be and why?

This is so hard. My go-to response is a princess, but I’m not even sure which one-I have five favorites. I think, if I was forced to chose, I’d have to say The Little Mermaid, because she’s a mermaid AND she gets to wear fancy dresses when she’s on land. I’ve always had a fondness for mermaids and the water!

The hardest to write was Eden because it was such a fine balance between making her harsh and giving her a heart but only allowing her to show glimpses of it. She has a crazy background that really plays into everything too.

9. Golden is full of secrets and surprises! Did you ever surprise yourself whenever you included something shocking, or did you plan them all out from the beginning? Are there any hints you would like to give out?

I frequently find myself surprised at some of the things that happen within my stories. My characters tend to surprise me more than anything. I’ll write a minor character who was only supposed to be in for a scene or two and suddenly they’re so important that they’re demanding their own spin offs! No joke-you’ll meet one of those characters that wormed their way in to my story in the series I have coming out in June, called Jaded.

As far as hints for Golden…no one is as they seem at first. Every situation has more than one side. There are also some secrets I’ve hidden in the story that do not affect the story line but are really cool extras (usually about the characters) that fans can find out by joining my live broadcasts and interviews that will give new depth to the entire story.

Also, there are hidden pictures and symbols within the chapter header graphics. You’ll have to use both hands to count them all…more than once.

10. You are a professional photographer! What do you love about photography? Do you have any tips and tricks you would like to share with us? 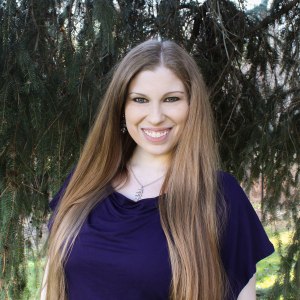 As far as advice: study, study, study. I take between 500-800 hours of continuing education every single year. I’m never done learning. And if you don’t take the time to learn it and learn it really really well, you’ll never survive. Creating new worlds in imagery takes so much training and practice to make it believable. I couldn’t always do the things I can do now, I had to put the effort into it and understand that I will never be done improving my craft.

11. How did you decide upon publishing your books with Snowy Wings Publishing?

It was a very long journey, actually. A few years ago I wrote the book and then did nothing with it. Eventually some people convinced me to do something with it, so I did a ton of research and submitted it to a few publishers I liked and trusted. I had a lot of interest, even some offers, but ultimately I turned them all down because they weren’t the right fit. The Snowy Wings came along and had so much of what I was looking for-the rest was history!

12. When you have a case of writer’s block, what is your go-to cure?

I typically work on more than one story at once, that way if I hit a wall with one, I can bounce over to a different manuscript and work on that for a few hours, and then come back to the one I was having trouble with. That almost always works. If it doesn’t, I do something else creative-fine arts conceptual photography, dress making, costume creation, etc-and that usually gets the creative thoughts flowing enough to jump back in!

13. How does it feel like to be a debut author? Could you describe some of your emotions when you found out you were going to be published?

It’s interesting. For so long I hadn’t planned on being a published writer, and then I got those books deals and thought “this is it, it’s real,” but then I ended up turning them down, and for a year I did nothing. I completely moved on with life. Now suddenly my books are being published and for awhile it just “was.” But now that I can hold the printed books in my hands, now that my swag is arriving in the mail, now that people are reviewing my book…it’s suddenly VERY real. Sometimes it’s the coolest thing in the world, and other times, it’s just part of everyday life.

It definitely became real when I opened my first box of proof books in a life broadcast over on my Facebook page. Now I’m speaking at schools, people I know are commenting on my book and asking questions, I’m working with bloggers and booktubers. It is now a very real part of my life and it’s pretty fun!

14. What are your current plans with your writing career?

I intend to keep writing. I have a second series debuting in June. I also have a number of other projects with “things happening” so we’ll see where all of that goes.

15. Do you have any tips to any aspiring authors or writers?

You can do this. Find positive influences in your life and let them help you stay on track and stay inspired. Do not listen to the people that tear you down-writing is subjective and not everyone will like your work. It’s okay for people to not like it.

Take the time to learn the business side of writing. Understand marketing, study branding, learn social media strategy, find people who know more that you do and become friends with them and learn from them. Get to know the industry and avoid making common mistakes that people don’t know about until they’ve already made them. Don’t go into this blind-take the time to learn and present yourself as a professional.

And finally, keep record of everything-you will use it later. Document your writing journey, from the desk where you wrote, to the things you were thinking, to the text messages your beta readers sent you. Keep a file and pull it out when it’s time to market or you need a pick-me-up after someone said something discouraging. You’ll thank yourself later for keeping these memories and feelings.

You’ve got this-don’t give up!

Thanks so much, Katie, for coming onto our blog! Can’t wait to read your book!

If you want to check out Katie’s book or social media accounts, or Snowy Wings Publishing (and join the Street Team!), click the links below!