Hi everyone! Today I’m am launching the Summer of Authors, a two-month event that last from the start of June to the end of July. We are showcasing and hosting many authors who have or are going to release their books in 2017, and we are holding some fun and awesome interviews, guest posts, and giveaways! Now to start off the Summer of Authors, I had the honor to interview the wonderful and amazing Mindy McGinnis, author of books such as The Female of the Species, Not a Drop to Drink, and her latest fantasy Given to the Sea!

About Given to the Sea

Khosa is Given to the Sea, a girl born to be fed to the water, her flesh preventing a wave like the one that destroyed the Kingdom of Stille in days of old. But before she’s allowed to dance – an uncontrollable twitching of the limbs that will carry her to the shore in a frenzy – she must produce an heir. Yet the thought of human touch sends shudders down her spine that not even the sound of the tide can match.

Vincent is third in line to inherit his throne, royalty in a kingdom where the old linger and the young inherit only boredom. When Khosa arrives without an heir he knows his father will ensure she fulfills her duty, at whatever cost. Torn between protecting the throne he will someday fill, and the girl whose fate is tied to its very existence, Vincent’s loyalty is at odds with his heart.

Dara and Donil are the last of the Indiri, a native race whose dwindling magic grows weaker as the island country fades. Animals cease to bear young, creatures of the sea take to the land, and the Pietra – fierce fighters who destroyed the Indiri a generation before – are now marching from their stony shores for the twin’s adopted homeland, Stille.

Witt leads the Pietra, their army the only family he has ever known. The stone shores harbor a secret, a growing threat that will envelop the entire land – and he will conquer every speck of soil to ensure the survival of his people.

The tides are turning in Stille, where royals scheme, Pietrans march, and the rising sea calls for its Given.

Honestly I think most authors will tell you we don’t necessarily love writing. It’s work, sometimes almost impossible work. We put it off, and find other things to do instead as often as possible. I wouldn’t say I love it – I’d say that I can’t not do it. I’ve always had stories in my head, but I didn’t write my first novel until I was in my 20s.

2. What are your favorite books, genres, and authors? Which ones have impacted you and you writing style the most?

I don’t really have favorites. I read widely and write widely. If its good, I’ll read it. I don’t really know who has influenced me either, as I do read SO much, it would be hard to pin any one thing down.

4. Your latest novel GIVEN TO THE SEA just released in April, and it takes place in the fantastic Kingdom of Stille. What was your process of world-building for this book? How was trying to create the Kingdom different from creating the fictional worlds in your other books?

The unique challenge in fantasy is that your reader can assume nothing. If I’m writing a contemporary and I tell you that my main character goes to a private school, drives a Mercedes, and only wears Prada, you can draw about 20 assumptions about her, her environment, and probably her past pretty easily. I don’t have to fill in the blanks.

In fantasy, if I tell you that one of my characters is the last surviving female of the Indiri… you know pretty much nothing. You can’t infer from that that she’s the only person in this world with magic, as only the females of the tribe carry that gift. You don’t know what her life is like – are in the Indiri a reigning class living in a castle with servants, or are they a wild, feral people? Are these royals? Are they cannibals? What is expected of this character in her class and situation?

You don’t know. And so I have to tell you. And I have to do it in a way that is not a bullet point list, boring to read and onerous to write. I have to give you seventeen years of backstory while also illustrating the present, seamlessly giving you the entire picture of her life while making it, you know, interesting.

Not easy. And that’s just one character. GIVEN TO THE SEA has four POV’s and as many highly unique and different cultures. Delivering all four – along with the land, the layout, the animals, the legend and history of this fictitious place – er… yeah.

Writing fantasy was the hardest genre I’ve tackled yet.

Oh I don’t know. I’m terrible at any of those kind of questions. The only thing I’m good at making crap up about is my novels. 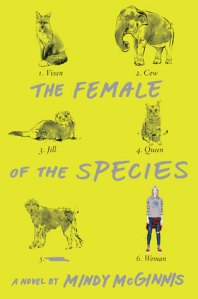 6. I have read THE FEMALE OF THE SPECIES a few months ago, and it was amazing! Since the book explores the theme of rape culture, what do you want the reader, regardless of gender, to take from it?

How it feels to be the opposite gender!

7. Since you’ve written books from dystopian and fantasy to thriller and contemporary, which genre is your favorite? Which out of the ones you’ve written is the most challenging?

8. You set many of your novels, such as A MADNESS SO DISCREET and your upcoming THIS DARKNESS MINE, in your home state of Ohio. What are some of your favorite things about Ohio? Why did you choose to use your home state as the setting?

It’s best to write what you know, and I know Ohio – thoroughly. I live in the middle of absolute nowhere, and my favorite thing is the isolation. Adore.

9. How is it like using your blog Writer, Writer Pants on Fire to help aspiring writers with the drafting, editing, publishing, and marketing processes? How did you come up with those hilarious acronyms for your interviews?

Honestly, I’m just full of shit is the best answer I have for that. I had a lot of authors who were agented, and even published, help me out when I first started on the bottom rung of the ladder, so I’m all about paying it forward.

10. I am so glad I got to see you at the Southeastern Young Adult Book Festival in Murfreesboro, TN! What do you like most about being an author at book festivals? How was your experience at SE-YA?

SEYA was probably one of the best festivals I have ever done! I love doing festivals and meeting readers, panels, Q&A’s, you name it. Since I write full time I don’t honestly get out much anymore so anytime I’m social that’s a good thing.

11. You’re planning to release THIS DARKNESS MINE, a YA psychological thriller, this October. What is it about? Would you like to give us any secrets about your next book? 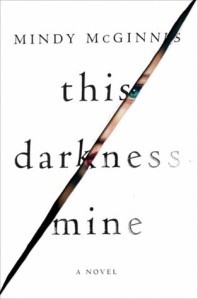 I find the best way to plug anything is to use a mashup, so THIS DARKNESS MINE would be Fight Club in the Band Room and the novel I just finished is Drunk Hatchet With A Girl.

12. Do you have any tips or advice you would like to give to any aspiring authors or writers?

You have to do the hard work and research in order to succeed. There is no such thing as an overnight success. I queried for 10 years before I got an agent. Among traditionally published authors the average is roughly 7 years. So, be ready for that. Grow thick skin.

Thanks so much, Mindy, for doing this interview! I’m super glad to have you on the blog!

Mindy McGinnis is an Edgar Award-winning author and assistant teen librarian who lives in Ohio. She graduated from Otterbein University with a degree in English Literature and Religion, and sees nothing wrong with owning nine cats. Two dogs balance things out nicely.

Mindy runs a blog for aspiring writers at Writer, Writer Pants on Fire, which features interviews with agents, established authors, and debut authors. Learn how they landed their agents, what the submission process is really like, and how it feels when you see your cover for the first time. Mindy does query critiques every Saturday on the Saturday Slash for those who are brave enough to volunteer.