Hi guys! Currently I’m out of town on a trip to Niagara Falls, so I’ll be on the other side of the border! I’m super excited about this trip to Canada- it’s my first time! And Summer’s almost halfway done? Can you believe it? I mean, sure I’m writing this post in early June (D-Day, to be exact), but by the time this is posted, Summer would have felt too short. In the meantime, we’re going to continue our special Summer of Authors event with Amber R. Duell!

A GOD OF WAR SEEKING RESTORATION.

BETRAYAL THAT COULD DESTROY THEM BOTH.

“[E]very fiber of my being is woven from the rage of mortals.”

Theodric, the young God of War, has a talent for inciting conflict and bloodshed. After being stripped of his powers by his older brother, King of Gods, he sets out to instigate a mortal war to prove himself worthy of being restored to power.

“I loved Kisk once; it was my home… But that was before. This is now.”

Sixteen-year-old Cassia, like many in the modern era, believes gods and goddesses to be just a myth. Enemy to her country and an orphan of the war, she has no time for fairy tales. That’s until religious zealots from Theo’s sect offer her up as a sacrifice.

Can Cassia and Theo end the mortal war and return balance to the earth and heavens? Or, will their game of fate lead down a path of destruction, betrayal, and romance neither of them saw coming? 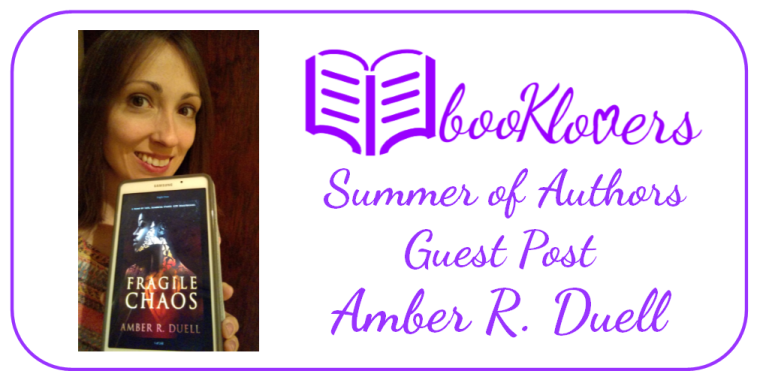 Hey! First, a huge thank you for LILbooKlovers for hosting me! I’m excited to be here and to talk about combining myth with reality.

In Fragile Chaos, I got the chance to work with both sides of myths—the truth and the exaggeration—which was incredibly fun!

Before I decided to create my own pantheon of gods, I read other mythologies and thought they were so crazy there was no way they could be real. I knew Cassia would be thinking the same thing. No one in her world believes in the gods and goddesses anymore, but the fantastic tales were still widespread and taught in school.

Theo, of course, is a shock to Cassia simply for existing, but if he existed, then she assumed all the stories she learned had to be real too. Except the gods and goddesses created the world and the rules that govern it, so of course there weren’t any people with wings or magic powers. Those myths had come out of much simpler truths. Naturally, having them broken down came with a healthy dose of frustration. At one point, Cassia asks another character about a certain myth and is told maybe half of it is true. She’s left wondering if she should take the entire story and dial it back ten notches, or if half of the story as-is was completely made up.

I like to think every myth has roots in reality, however shallow they run. The truth just became a huge magical adventure through an endless game of Telephone. One person witnesses the truth and tells their neighbor with a little exaggeration. The neighbor tells his friend with a bit more, then the friend tells his wife who tells her friends in the next village, each one making the story a little more dramatic. Soon the fish is thiiiis big! and the real events are forgotten, leaving the myth in its place.

Or maybe it was never a true story at all, but something created to be a cautionary tale or to offer a reason for how the world works. Either way, I think myths prove how much humans have always loved a good story!

Great post, Amber! Thank you so much for coming onto the blog! 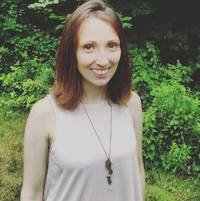 Amber R. Duell was born and raised in a small town in Central New York. While it will always be home, she’s spent the last six years living in Germany and Maine as a military wife where the next step is always an adventure.

When Amber isn’t writing, she’s wrangling her two young sons. She is a lover of history, a fan of snowboarding, and a travel enthusiast. In her downtime, she can be found curling up with a good book and a cat or two.

Today’s prize is an e-ARC of Fragile Chaos! This is open to all Int’l residents, but NO giveaway accounts! If I find out that your Twitter account is a giveaway account, you are automatically disqualified.

I hope you enjoyed this Summer of Authors guest post! Happy Reading!