Hi guys! Happy Friday! With the Christmas season underway, I am going to be extremely busy with concerts and schoolwork. Right now, I have two concerts tomorrow, APUSH and AP Language finals next week, and various performances scattered over the next couple of weeks. So I am going to be a bit offline at the moment because of that, but I will still post my usual two posts a week! Today I have a review of one of the first ARCs I have been sent by a publisher after I emailed them via their publicity email, so I am super excited to show you this review of As You Wish by Chelsea Sedoti! 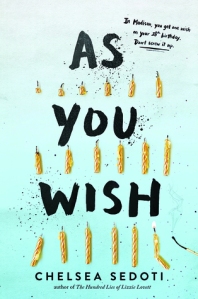 What if you could ask for anything- and get it?

In the sandy Mojave Desert, Madison is a small town on the road between nothing and nowhere. But Eldon wouldn’t want to live anywhere else, because in Madison, everyone gets one wish—and that wish always comes true.

Some people wish for money, some people wish for love, but Eldon has seen how wishes have broken the people around him. And with the lives of his family and friends in chaos, he’s left with more questions than answers. Can he make their lives better? How can he be happy if the people around him aren’t? And what hope is there for any of them if happiness isn’t an achievable dream? Doubts build, leading Eldon to a more outlandish and scary thought: maybe you can’t wish for happiness…maybe, just maybe, you have to make it for yourself.

Disclaimer: I received a free physical ARC of this book from the publisher in exchange for an honest review. This will not affect my review in any way.

I loved Chelsea Sedoti’s YA debut novel The Hundred Lies of Lizzie Lovett so much, so I was so stoked to receive a physical ARC of her newest book As You Wish for a review! However, as I read the reviews, and a lot of them were not too positive, so I became scared that I would not like the narrator that much. However, when I first started this book, I was blown a way. It was the first YA novel in a long time that I could not put down, and I devoured its 400 pages in just a few days. I just could not put it down even though I had a lot of stuff to do at the time. As You Wish is magical realism at its finest: Sedoti features a captivating wish system while shedding light onto humanity’s wants and desires.

From page one, I became fascinated with how the town of Madison revolved around wishing. I became entranced by the Wish History of many characters and the effects of them. The Wish History was definitely one of my favorite parts because I love backstory and world-building so so much! As You Wish felt so magical and enchanting that I felt torn between whether I would like to live in Madison or not (probably not, haha). I became so intrigued by the world-building of the book that I became sucked into it. I just could not put it down, and I just did not want to leave.

Usually I’m not too big of a fan of character-driven books because I usually need a plot or some sort of actual conflict and a goal to overcome it, but the story in As You Wish actually worked for me. Sedoti just surprised me in so many ways! In addition, I was afraid (from many of the reviews I’ve read) that I would be annoyed by Eldon, the main character/narrator, because he is obnoxious and annoying. While he did have a roguish personality, I became so connected to him. I knew his struggles. It was as if the whole town hated him but only I knew his deepest secrets, regrets, and fears. I loved his character arc, too—it definitely was heartwarming. He may not have had the best personality among the main characters I’ve read, but he is one of the only ones I felt a strong connection with.

As You Wish is one of the most thought-provoking and life-changing books I’ve read. The author uses the town’s wish system as a means of shedding light onto one of the world’s oldest themes: “Be careful what you wish for.” But she turns this usually clichéd moral into a reality that has affected the citizens of an entire town who has worshipped wishes so much that the residents have become blinded to its dangers even though they have become aware of its consequences. This novel got me thinking, “Are my wants and aspirations in the best interests for me?” So many times have the wishers (in the book) succumbed to thoughtlessness as their wishes may seem good in the short-run but later lead to little or unintended effects. While I do disagree with one section, this book has made such a tremendous impact on the way I view the “wishes” I have. As You Wish made me realize that many times what I want may not be beneficial to me and that sometimes what is best for me may not be what I had in mind.

Chelsea Sedoti is becoming one of my favorite authors because I’ve rated both her books five stars! Her prose never ceases to amaze me. As You Wish definitely lived up to the hype that The Hundred Lies of Lizzie Lovett created for me. This book exceeded my expectations so much, and now I really want the next book Sedoti has in store. If I were an English teacher who has to give a lesson on magical realism, I would assign As You Wish! It effectively combines the fantastic with the ordinary, the unimaginable with the believable, the hopeful and the despairing. I was so fascinated with this book that I just could not, and I mean this literally, put this down. It felt so refreshing to read a novel that was so sweet and succulent that I just wanted to devour it all at once. As You Wish is a book you do NOT want to miss in the New Year!

Are you excited for As You Wish? Do you like YA magical realism?

4 thoughts on “ARC Review: As You Wish by Chelsea Sedoti”