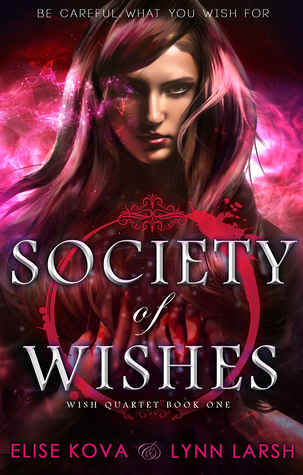 Hi guys! As a proud member of Elise Kova’s Street Team, I am excited today to be sharing my review of her (along with debut author Lynn Larsh’s) newest NA urban fantasy novel Society of Wishes, which is the first installment of the upcoming Wish Quartet series! I hope you enjoy this review! 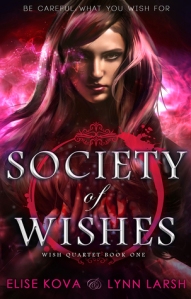 BE CAREFUL WHAT YOU WISH FOR.

Josephina Espinosa makes her living as a hacker-for-hire in the Lone Star Republic, a remnant of the fractured U.S.A. That is, until the day she and her best friend are gunned down in a government raid.

With her dying breath, Jo uses magical lore passed down from her grandmother to summon a wish-granter. Her wish? To save her friend’s life. Except wishes have costs, and for Jo, the price is the erasure of her entire mortal existence.

Now, as the most recent addition to the mysterious Society of Wishes, Jo must form a new “life” alongside the seven other members, one of which being her savior himself. Living as an occupant of the Society’s lavish mansion should be quite the perk, but while it is furnished with everything its inhabitants could possibly need, it lacks one thing—freedom.

Her otherworldly identity crisis takes a backseat, however, when Jo learns that the friend she sacrificed everything for is headed down the same path to ruin. Jumping in head-first, Jo uses her newfound magical abilities to protect him, only to realize that the ripples of her actions have far-reaching consequences. When the Society’s aloof leader Snow decides to give her a taste of his own ancient magic, Jo discovers that there are threads woven into the tapestry of her new reality that reach far beyond the wishes she is now required to grant. Ones that, if tugged on, could mean the unraveling of her existence itself.

Society of Wishes will release on January 29th from Silver Wing Press.

Disclaimer: I received a free electronic ARC of this book from one of the authors (Elise Kova) in exchange for an honest review.

I was really excited to read this book when my e-ARC landed its way into my inbox. Although it did start off a bit rocky to me, I became sucked into the novel quickly afterwards. There were times when I could not put it down, for I fell in love with the characters and the world-building and the plot. The first installment in Kova and Larsh’s The Wish Quartet feels a lot like an exposition—while it did have a lot of plot, I feel as if it’s only just the start to something even bigger, in which I’ll just have to wait and see what happens next. Society of Wishes is an engaging paranormal fantasy that will both fascinate and haunt readers at the same time as it kicks off a promising fantasy series.

One of the biggest themes in Society of Wishes focuses on the price of each wish. Jo and the other members of the Society had to sacrifice their physical lives to save others. The nurse, who wished for a cure to her patient’s rare disease, must give up the possibility of her ever becoming a doctor. Can you imagine that? Each wish made in the novel’s fictional universe has a price to pay, and while that’s not always the case in our lives (whereas we have the power to change the world “not through a wish, but through the actions and infinite possibilities you create”), it sheds a light upon the sacrifices we must take if we want a certain outcome. Although it may not be a “curing a patient for your career as a doctor”-type scenario, we do have similar dilemmas in our everyday lives. What must you give up in order to make your wish come true? I love novels that pose these types of questions to the readers.

I really loved the world-building both Kova and Larsh put into the Society. I felt myself very intrigued by the mysterious members who have “erased” themselves from the real world, and I would love to learn more and more about the history behind everyone and how they ended up in the Society. One of the aspects of the novel I was highly looking forward to was the magic and the wish system (this is how I, as a fantasy lover, distinguish between a good and a bad fantasy novel), and it definitely dazzled and enchanted me. At times it was as if I became transported into the novel, fighting alongside Jo or getting chills down my spine. Surely the world-building, though I did have a couple of concerns/times I felt uncomfortable (see below), was well-crafted by the authors.

I do have only two concerns with this book since it is New Adult, rather than Young Adult. Although it does have a YA crossover appeal (believe me, I didn’t notice too much the difference in the characters’ ages versus mine), it does have a graphic sex scene or two in the middle of the novel. If you’re a reader—like me—who prefers clean fiction, then I’m giving you that heads up. In addition, while the novel does make its own fantastical magic/paranormal world, it gives off an “occultish” vibe at some points, which made me a bit uncomfortable (I don’t ever want to get mixed up with that stuff). While the novel, the world-building, and the plot were really well-written, those are my only two big “problems” I had.

Overall, I enjoyed Society of Wishes. Even though there were times when certain plot points didn’t have the punch I was hoping for  (I was shocked but not stunned), it still put me on the edge of my seat. I am really looking forward to what happens next in the sequel Circle of Ashes—I could feel the tension between the characters arising (and maybe a spark between Jo and a special somebody?… no spoilers, haha!). I have great hope that each book in the series will become better and better. Already, the world-building has gotten me enchanted; now comes high-stakes plot and conflict. Will the next installment blow me away more than Society of Wishes? I’m just going to have to wait.

Are you excited for Society of Wishes? What’s your favorite fantasy book?