Hi guys! We have an amazing lineup of 2018 debut authors in store for you this year, and we’re kicking off all the #2018debuts with Eliot Sappingfield, author of A Problematic Paradox! I loved this book so much because it gave me so many laughs and hilarious moments, and I am glad I have the opportunity to interview the author about it! Hope you enjoy! 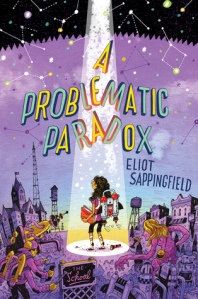 Guardians of the Galaxy meets The Hitchhiker’s Guide to the Galaxy in this wild, warm-hearted, and hilarious sci-fi debut about a brainy young girl who is recruited for a very special boarding school.

Nikola Kross has given up on living in harmony with classmates and exasperated teachers: she prefers dabbling in experimental chemistry to fitting in. But when her life is axially inverted by a gang of extraterrestrials who kidnap her dad and attempt to recruit her into their service, she discovers he’s been keeping a world of secrets from her–including the school for geniuses where she’s sent for refuge, a place where classes like Practical Quantum Mechanics are the norm and where students use wormholes to commute to class. For Nikola, the hard part isn’t school, it’s making friends, especially when the student body isn’t (entirely) human. But the most puzzling paradox of all is Nikola herself, who has certain abilities that no one understands–abilities that put her whole school in greater danger than she could have imagined.

1. Your debut MG sci-fi novel A Problematic Paradox is releasing on January 23rd from G. P. Putnam and Son’s, and it follows Nikola as she is sent to the School, concealed from the outside world and filled with extraterrestrial creatures and futuristic technology, after her father is kidnapped by a group of aliens called “the Old Ones.” If you had the opportunity to become enrolled in the School, would you go? What classes would you want to take, and what would you be most looking forward to as a student?

Absolutely! Practical Quantum Mechanics sounds like a lot of fun to me, even if I might not be able to keep up with the actual geniuses there.

There’s also the fact that since I wrote the place, I’d be kind of like a god, and could control reality and bend others to my every whim. I’d be cool about it, though.

2. Nikola struggles to both fit in as a genius in her old school and as a human in her new school mostly comprised of parahumans, extraterrestrial creatures with extraordinary capabilities. How do you want A Problematic Paradox to impact young readers, especially regarding the themes of bullying and fitting in?

I wanted it to be realistic. A lot of times, especially in those middle school years, kids find themselves in impossible situations and are given terrible advice for dealing with it. It’s not that adults want to give bad advice; it’s just that every situation is different and what works for one kid doesn’t always work for others.

Since that’s just a fact of life for some, what I really wanted to do was to focus not on overcoming bullies, but on not letting them make your whole world as ugly as they are. It can feel safer to close yourself off, and avoid people altogether, but that stops you from connecting with the wonderful people that are all around us, sometimes dealing with the same issues.

I had a tough time in school myself, but was lucky enough to make friends that made it all worthwhile. Today, looking back, I can’t recall the face of a single bully, because they’re ultimately forgettable (which might be why they’re bullies in the first place) but I still speak to some of the friends I made back then.

3. Since Nikola’s primary passion is science, why do you believe it is important to portray more empowering girls pursuing STEM-related careers as protagonists and deuteragonists in Middle Grade fiction?

That was actually where the idea for the book came from initially. I wanted to write a science fiction story with a female hero, but one that wasn’t a “girl book”. My daughters complained that there weren’t enough science books with girl heroes, and challenged me to come up with one. I’ve heard the middle grade years are when a lot of young women turn away from the sciences and start embracing what they think are gender-normative goals, so I really loved the idea of creating a world where a girl being brilliant and deeply interested in science isn’t just possible, it’s the norm.

4. Could you describe to us your world-building and character-creating process? How did you formulate the unimaginable technologies, the eccentric student population, and the School itself?

Some of the tech in the book is drawn from science fiction, me playing around with concepts I find interesting. Wormholes, for instance.  My favorite things are based on real science, interesting inventions and discoveries I’ve heard of. As an example, there’s a sonic cannon in the book- which is based on a phonon sound laser I read about being developed at Caltech. Although mine is way cooler, since it doesn’t have to actually exist. Sorry, Caltech.

I don’t really have a process of coming up with characters or settings- I tend to write a lot of things, and cut what I don’t find memorable, funny, creepy or strange later on, so I suppose it’s a bit Darwinian.

5. I really loved all the humor you packed into A Problematic Paradox! I found myself laughing very hard at times! Would you consider yourself to be a jokester? What is the funniest joke or most hilarious moment in your life that you can think of?

Everything in the book is 100% absolutely serious, and I have no idea what you’re talking about.

Real answer: I am a bit of a jokester, but I tend to be a lot funnier if I have time to construct a joke, think it over, rephrase it a couple times, edit it for clarity and brevity, and rewrite it after running it past test readers and editors.

6. How did you come up with the title? Have you ever been in any problematic paradoxes yourself?

I’ve always loved paradoxes. When I was a kid, I had a whole book of them I read about a dozen times- stuff like “This statement is false”, etc. They’re also the most interesting part of time travel, so it pretty much had to be in the title.

7. Why do you love writing? When did you first have a love for writing, and how was it formed?

The first thing I ever wrote that I really put a lot of work into, at least the first thing I remember was a book report on “White Fang” by Jack London. It was for a middle school English class, and was my last chance to salvage my grade after a somewhat uninspiring performance that semester. I stayed up most of the night before it was due working on it. In the end, I got an A, and the teacher made me read it out loud to the class, which was a major confidence booster.

That taught me a very important lesson about writing: if you do it well enough, it can make up for a lot of slacking.

8. What are your favorite books, genres, and authors? Which ones have impacted you and your writing style the most? 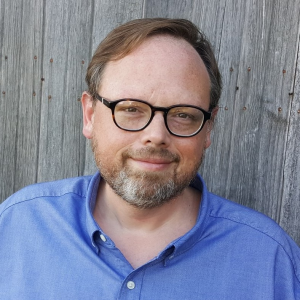 I love any story with strange characters, interesting worlds and new ideas that set your imagination running. Because of that, I find myself drawn to science fiction.

My all-time favorite writer is Kurt Vonnegut. I love the way he absolutely refused to follow the rules of the genre, or any genre for that matter, and how he used his stories to say huge, incredibly important and often terrifying things in a way that makes you laugh in spite of the world and how horrible it can be.

My favorite book is probably Catch-22- for some of the same reasons, and also because of how hilariously, intentionally ridiculous it is. If you haven’t read it, it’s set in World War II and a lot of the book makes absolutely no sense at all.  But that’s kind of the point, because war doesn’t make any sense at all, either.

9. What do you do when you’re not writing? Is writing a part-time or full-time job?

By day I do graphic design and other creative junk for a big corporation. It’s my hope that someday I’ll be able to write full-time.

10. What are you most looking forward to as a debut author in 2018? How do you feel knowing that your first ever book is being released in just a few more weeks?

I’m kind of freaking out about it, to be honest. I don’t know whether to be excited or anxious or both. Really the coolest part will be knowing that people out there who I’m not related to are reading my story. How weird is that?

11. Will there be a sequel to A Problematic Paradox? What else can we be looking forward from you in the future? Could you give us any hints or secrets on what’s to come?

There will be a sequel, and it’s almost finished. It has a barking mule, an exploding house, and lots of resolutions to things that happened in the first book.

12. Before you go, would you like to share any advice you have to any aspiring authors or writers?

No. The last thing I need is more competition.

Just kidding. The best advice I can give would be:

Write as much as possible. Make it a habit. Don’t wait for inspiration, because inspiration only happens when you’re already working on something.

Use creativity whenever and wherever you can. If you’re writing an email to complain about your internet service, make it a REALLY good email.

Have fun. If you enjoy making something, that’s a good sign that someone else will enjoy reading it.

Thanks so much, Eliot, for coming onto the blog! It was so fun having you!

Eliot Sappingfield is a complex multi-cellular organism that lives in Southwest Missouri with his wife, dog and children, when they’re around. He loves books (especially science fiction), all kinds of games, devouring useful & useless information on the Internet, fighting crime with his bare fists, and lying about 20% of the time.

A Problematic Paradox is his first novel.

Are you excited for A Problematic Paradox? Do you like MG Sci-Fi?