Hi guys! Happy Valentine’s Day and Ash Wednesday! Last year, I had the amazing chance to meet Shaila Patel at the Southeastern Young Adult Book Fest and read her wonderful YA debut romance Soulmated, which was one of the best books I have read in the Winter/Spring of 2018. As a proud member of her Street Team, I am so happy to present to you the cover for the long anticipated sequel Fighting Fate! It’s such a gorgeous cover, so check it out below!

And if you want to check them out, here are links to my review of Soulmated and Shaila’s guest post!

Let’s count down from 5!

The moment you’ve all been waiting for!

The cover for Fighting Fate!

Empath Liam Whelan is determined to protect Laxshmi “Lucky” Kapadia, the girl he loves, at all costs–even if it means breaking her heart to keep her alive. Stopping the joining cold means Liam’s life is in danger from the Soul Seekers and the ruthless Minister Gagliardi who now has designs on Lucky. Liam has no choice but to find the strength to fight his desires, fight the joining, and fight fate.

After the unthinkable happened, Lucky’s “hallucinations” have been working double-time. Heartbroken and plagued by doubts, she meets a man who gives her a mind-blowing explanation for her predicament. Her apparent savior provides her with an escape from her hell: run away with him or return to her drab existence and watch Liam move on with her heart in his hands. All Lucky ever craved was to be in control of her own fate, but when her only choices fight against her heart, can she find the strength to battle for what she wants? 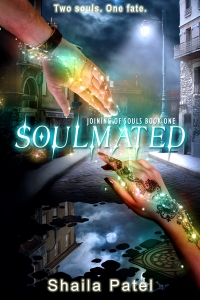 All eighteen-year-old Liam Whelan—an Irish royal empath—wants to do is stop the frustrating search for the elusive girl destined to be his soul mate. The rare union will cement his family’s standing in empath politics and give the couple legendary powers, painting a bullseye on Liam’s back—and hers.

All Indian-American Laxshmi Kapadia wants is to free herself from her traditional mother’s ultimatum: graduate from high school early and go to medical school, or have her marriage arranged. Neither allow her to pursue her dreams of a career in dancing or of falling in love.

When Liam moves in next door to Laxshmi—a non-empath, he’s immediately drawn to the purity of her emotions, and she sees in this charming Irish boy a future with the freedom to follow her heart. But Liam’s father will never consent if she’s not The One. And Laxshmi’s mom won’t even let her talk to their handsome new neighbor. But hiding their relationship can’t keep them from becoming targets of dark and ancient group determined to destroy the soulmated.

What will these two risk to choose their own fate?

An Exclusive Excerpt from Fighting Fate

Under the cover of her porch, I returned her bag to her. We moved apart. With the connection broken, she let out a shuddering sob. The pain of separating from her hit me square in the chest. I wanted to hold and comfort her, but I was already making a dog’s dinner of this just by being here. This would set her back—set us both back.

She turned away from me. Her hand shot up to her mouth, and her shoulders shook. I instinctively stepped forward, but all I could do was curl my fingers into my palms to keep from touching her.

“I miss you so much, Liam,” she said, the words choked out between hoarse cries. “I’m sorry. I know I’m not supposed to be weak.” She slapped away her tears and turned to face me. A bolt of lightning cracked nearby. I couldn’t stay. The tingling was pulling us together like it was some sort of magnetic current.

Her eyes grew cold in an instant. The fury of the sandstorm I sensed from her made me gasp, and I stumbled back. “Jaysus, Lucky.” We were crossing interpretations again. I was reading her emotions as air metaphors instead.

She barreled toward me, her hands balled up, apparently unaware of the effect her anger had on me. “You have no right to miss me. You left me!” She beat her fists against my chest, and I had to grab her by the wrists to stop her.

“Are you thinkin’ this has been easy for me?”

She wriggled free from my grip. “Whose fault is that?” she yelled above a roll of thunder. I didn’t want her to see the pain on my face, so I turned away, holding myself up on the white, wooden railing. The whirlpool of her anguish surrounded me, making my head ache.

I took a deep breath and lowered my voice. “Lucky, I broke my promises to you. For that, I’m truly sorry. But I had little enough choice. None of that changes my feelings for you.”

I heard her fumbling for her keys. She’d be inside soon, and I’d rather be fighting with her on the porch than be without her.

“So where next, hmm?” she asked. “North Dakota? Vermont? Ooo, I know. You should go to India. You could play this game for the rest of your life!”

I turned to face her. Her sarcasm was brutal, but I deserved all that and more.

She tried to unlock her door, but the keys slipped from her grip. She stooped to pick them up, but her fingers were shaking so badly, she dropped them again.

“Dammit!” She crouched a second time and sucked back another sob.

I swept down and set my hands over hers to steady them. Taking the keys, I unlocked the door, followed her inside, and bundled her in a blanket from off the sofa. Lucky didn’t protest. We stood there, dripping water on her mum’s carpet, staring into each other’s eyes. Grabbing fistfuls of the covering around her neck, I gently rocked her, tugging her closer, fighting the craving to kiss her. My breaths came out fast and shallow, and only clinging to the material with both hands kept me from sneaking a touch of her soft skin. If I didn’t leave now, I’d stay because I didn’t have an ounce of the strength she had. Maybe I was the coward she’d accused me of being.

Prizes: A Fighting Fate Paperback ARC (US) or an eARC (Int’l) and a #25 Amazon electronic gift card (Int’l)

As an unabashed lover of all things happily-ever-after, Shaila Patel’s younger self would finish reading her copy of Cinderella and chuck it across the room because it didn’t mention what happened next. Now she writes from her home in the Carolinas and dreams up all sorts of stories with epilogues. A member of the Romance Writers of America and the Society of Children’s Book Writers and Illustrators, she’s a pharmacist by training, a medical office manager by day, and a writer by night. SOULMATED, her debut novel and the first book in the Joining of Souls Series, was the winner of the 2015 Chanticleer Book Reviews Paranormal Awards for Young Adult. Book 2, FIGHTING FATE releases April 2018. She loves craft beer, tea, and reading in cozy window seats—but she’ll read anywhere. You might find her sneaking in a few paragraphs at a red light or gushing about her favorite books online.

Are you excited for Fighting Fate? Have you read Soulmated?

3 thoughts on “Cover Reveal for Fighting Fate by Shaila Patel, the Anticipated Sequel to Soulmated, plus an Exclusive Excerpt!”