Hi guys! I have a gigantic slew of MG novels that I need to review for y’all, so for the upcoming weeks, you will see a bunch of reviews of some amazing Middle Grade books! Spoiler alert: They’re all four or five star ratings! To start off, today’s review is on Ahimsa by Supriya Kelkar, which is set in 1940s India during the Freedom Movement. Sounds intriguing? Go read it! You will not regret it! 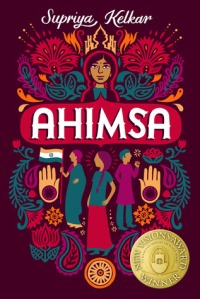 In 1942, when Mahatma Gandhi asks Indians to give one family member to the freedom movement, ten-year-old Anjali is devastated to think of her father risking his life for the freedom struggle.

But it turns out he isn’t the one joining. Anjali’s mother is. And with this change comes many more adjustments designed to improve their country and use “ahimsa”—non-violent resistance—to stand up to the British government. First the family must trade in their fine foreign-made clothes for homespun cotton, so Anjali has to give up her prettiest belongings. Then her mother decides to reach out to the Dalit community, the “untouchables” of society. Anjali is forced to get over her past prejudices as her family becomes increasingly involved in the movement.

When Anjali’s mother is jailed, Anjali must step out of her comfort zone to take over her mother’s work, ensuring that her little part of the independence movement is completed.

Inspired by her great-grandmother’s experience working with Gandhi, New Visions Award winner Supriya Kelkar shines a light on the Indian freedom movement in this poignant debut.

Disclaimer: I received a free finished hardcover copy of this book from the publisher in exchange for an honest review. This will not affect my review in any way.

I rarely rate books five stars anymore. A book is awarded five stars for one of three reasons: it is a new all-time favorite, it resonates with me on such a deep basis, or it has the power to change lives including my own. Ahimsa is a novel that will influence the viewpoints of readers, regardless of age. It is such a thought-provoking and emotionally gripping story that will inspire readers to persevere in their battles. Although I was not very into the story at first since it was written in third-person, the deeper I progressed into Anjali’s fight for freedom, the more that I literally could not put the book down.

Historical fiction has always been my favorite genre, and Ahimsa is one of the most well-written and well-versed MG historical fiction–even historical fiction in general–novels I have read. The Indian Freedom Movement isn’t covered very much in MG or YA literature, which is one reason why I decided to request for this novel. I truly felt transported into colonial India as the atmosphere full of tension brimming to a boiling point transcended the pages. The author displays how Indians were not just divided racially (whites versus Indians) or religiously (Hindus versus Muslims), but among themselves. Ahimsa shows how families and friends were divided over the Freedom Movement as radical ideas full of love and peace were met with backlash fueled by despair, fear, or grief. Many Indians fought against the upheaval of the caste system while others were more consumed over racial conflicts than independence. Ahisma paints a stark, authentic, yet beautiful portrait of the conflicts raging in India at the time.

Throughout the story, Anjali learns what it truly means to embrace love and peace as she fights alongside her mother for freedom. That means she has to sacrifice literal blood, sweat, and tears as she gives up many of her possessions, puts herself in dangerous situations, and embraces the Untouchables (the lowest caste in the caste system) as equals. But she also sees how everything isn’t very black and white–how most things are very gray and how everyone, from her friends to her enemies, have multiple sides. Ahimsa gives readers an insight to what ahimsa truly is: not just fighting without any violence, but fighting with such an intense love for one’s enemies. It moves you to love and treat everyone with kindness and respect and to better understand them.

Ahimsa also inspires readers not to give up. I read this story at a time when I felt  overwhelmed, but Anjali’s growing and continued perseverance inspired me to progress forward. If a young girl can face death threats and large catastrophes and still maintain hope for a brighter future and perseverance for her cause, certainly I can keep on fighting, too. Ahimsa accomplishes what every great Middle Grade novel does to its readers, regardless of age: instills in them a newfound sense of hope.

I would recommend Ahimsa to young readers in a heartbeat! It is fast-paced yet very deep in both its subject matter and its protagonist’s thoughts and internal reflections. Kelkar’s debut novel is as fascinating as it is enlightening, and readers of all ages can find themselves changed by this story of hope and perseverance in struggles and adversity. Ahimsa is truly a masterpiece that should be in every school classroom and library.

Born and raised in the Midwest, Supriya learned Hindi as a child by watching three Hindi movies a week. Winner of the 2015 New Visions Award for her middle grade novel AHIMSA, (October 2, 2017), Supriya is a screenwriter who has worked on the writing teams for several Hindi films, including Lage Raho Munnabhai and Eklavya: The Royal Guard, India’s entry into the 2007 Academy Awards. She was an associate producer on the Hollywood feature, Broken Horses. Supriya’s books include AHIMSA, THE MANY COLORS OF HARPREET SINGH (Sterling, 2019), and THE SANDALWOOD PYRE (Tu Books, 2020). Supriya is represented by Kathleen Rushall at the Andrea Brown Literary Agency.

Have you read Ahimsa? Do you like MG historical fiction?

3 thoughts on “Book Review: Ahimsa by Supriya Kelkar — A Masterpiece that Should Be in Every School Classroom and Library”