Hi guys! I am super excited for this month’s LILbooKtalk! I had the amazing opportunity to read both of these excellent debuts, and they share so many similar themes and conflicts that I had to invite both of the authors in our February panel. Today, we have Corabel Shofner, author of Almost Paradise, and Leslie Hauser, author of Chasing Eveline, on the blog today to talk about “Healing through Stories: Two Novels of Uniting Families.” It was definitely a fun chat to moderate, and I hope you enjoy it!

Twelve-year-old Ruby Clyde Henderson’s life turns upside down the day her mother’s boyfriend holds up a convenience store, and her mother is wrongly imprisoned for assisting with the crime. Ruby and her pet pig, Bunny, find their way to her estranged Aunt Eleanor’s home. Aunt Eleanor is a nun who lives on a peach orchard called Paradise, and had turned away from their family long ago. With a little patience, she and Ruby begin to get along―but Eleanor has secrets of her own, secrets that might mean more hard times for Ruby.

Ruby believes that she’s the only one who can find a way to help heal her loved ones, save her mother, and bring her family back together again. But being in a family means that everyone has to work together to support each other, and being home doesn’t always mean going back to where you came from. 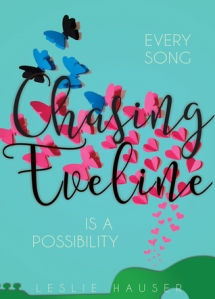 Sixteen-year-old Ivy Higgins is the only student at Carmel Heights High School who listens to cassettes. And her binder is the only one decorated with album artwork by 80s band Chasing Eveline. Despite being broken-up since 1989, this rock band out of Ireland means everything to Ivy. They’re a reminder of her mom, who abandoned Ivy and her dad two years ago. Now the music of her mom’s favorite band is the only connection she has left.

Even though Ivy wavers between anger and a yearning to reconnect, she’s one-hundred percent certain she’s not ready to lose her mom forever. But the only surefire way to locate her would be at a Chasing Eveline concert. So with help from her lone friend Matt—an equally abandoned soul and indie music enthusiast—Ivy hatches a plan to reunite the band.

The road to Ireland won’t be easy, though. And not just because there is no road. Along the way they’ll have to win over their Lady Gaga-loving peers, tangle with some frisky meerkats, and oh yeah, somehow find and persuade the four members to play a reunion gig. It’s a near-impossible task, but Ivy has to try. If she can’t let go of the past, she’ll never be able to find joy in the present.

Questions are in bold

Kester: The first author we have today is the wonderful Corabel Shofner, who I had the pleasure of meeting at the Southern Festival of Books last October. Her Middle Grade debut novel Almost Paradise released last summer, and I enjoyed it so much that I finished it in a day! Could you describe to us a bit about your book and yourself?

Corabel: ALMOST PARADISE is a Middle Grade contemporary novel with lots of whimsy, humor and heartbreak. In some ways it is a reverse coming of age story, since Ruby Clyde had taken on the adult role in her family and needs to reclaim her childhood. I am a wife and mother who lives in Nashville, TN. I had a very colorful life before I settled in the suburbs and I love it out here. ALMOST PARADISE is my debut novel although I have written law, short stories, essays and such.

Kester: Thank you, Corabel! It’s so great to be having a local Tennessee author here on the blog! We also have the amazing Leslie Hauser, who I was able to interview on my blog last summer. I loved her Young Adult contemporary debut Chasing Eveline, which I also devoured in a single day! Would you also like to share with us a bit about your novel and your background?

Leslie: Hi! Thanks for having me here. CHASING EVELINE is about 16-year-old Ivy HIggins and her desire to reunite her mom’s favorite 80s band. She thinks it may be the only way to find her mom who left Ivy and her dad several years prior, but also the music is a way to keep her mom present in her life. It also has some humor and heartbreak–sounds like a good companion to ALMOST PARADISE! I am a middle school English and history teacher in California and CHASING EVELINE is my debut novel.

Kester: Chasing Eveline and Almost Paradise are definitely great companions! (And you provided the perfect segue for my next question, Leslie!) That’s why as I read both of your novels, I noticed that each of your main characters share the common goal of healing their broken families. How do you want readers to be impacted by Ivy’s attempts at finding her long-lost mother or Ruby Clyde’s actions to help her mother avoid being imprisoned? How do your characters learn what it means to love those around you?

Leslie: Losing someone is difficult. I realized after my aunt passed away that every year, the memories became dimmer. It’s to the point now where I can’t even see parts of these memories (like the picture in Back to the Future! If you’re familiar with that movie.) Ivy’s quest to reunite Chasing Eveline is her way of dealing with loss and trying to keep her mom present. I wanted to write a story that shows that there are productive outlets for grief. I would hope readers would see that as a takeaway.

Corabel: Hi Leslie, I haven’t written anything with music as an element but I love the way Ivy seeks her mother through her mother’s favorite 80’s band. Reminds me a bit of Guardians of the Galaxy where he’s stomping through puddles listening to his mother’s old music, on an old player. Ruby Clyde is a self possessed little thing. She willingly steps up to care for her fragile mother but when the Catfish (mother’s rascal boyfriend) launches off on a cross country trip and gets them both arrested, Ruby Clyde is consumed with a longing for home and a growing realization that she might not be able to single handedly save her mother from prison. I want my readers to feel brave. Bravery is contagious.

Leslie: Sounds like Ivy and Ruby both have to step up in their families. Ivy feels compelled to take care of her dad in her mother’s absence. Bravery is definitely important when dealing with these struggles.

Corabel: Everybody loves the precocious child, the ‘little mother’ or the one who takes care of everything because a parent is damaged. People should realized that these children pay a price by losing their childhood. My sister did that in our family and it did not end well. I’ve since seen other children try to play this role and it breaks my heart. But their old personalities in the miniature bodies is often hilarious.
END_OF_DOCUMENT_TOKEN_TO_BE_REPLACED