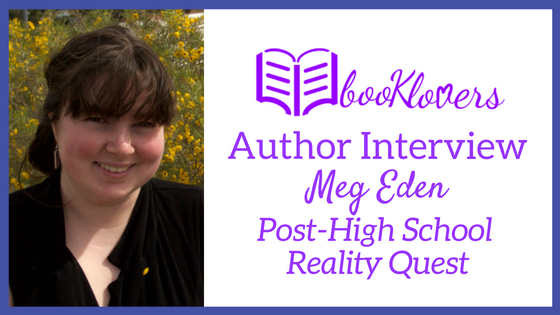 Hi guys! Today is the 1-year book birthday of Post-High School Reality Quest by Meg Eden, probably one of the most unique books you will ever read if you decide to pick it up. Well, today you have the opportunity not only to learn more about the story but also to win a copy of the book PLUS a narwhal mug and infuser. And you can’t say no to narwhals, can you? Enjoy!

Buffy is playing a game. However, the game is her life, and there are no instructions or cheat codes on how to win.

After graduating high school, a voice called “the text parser” emerges in Buffy’s head, narrating her life as a classic text adventure game. Buffy figures this is just a manifestation of her shy, awkward, nerdy nature—until the voice doesn’t go away, and instead begins to dominate her thoughts, telling her how to life her life. Though Buffy tries to beat the game, crash it, and even restart it, it becomes clear that this game is not something she can simply “shut off” or beat without the text parser’s help.

While the text parser tries to give Buffy advice on how “to win the game,” Buffy decides to pursue her own game-plan: start over, make new friends, and win her long-time crush Tristan’s heart. But even when Buffy gets the guy of her dreams, the game doesn’t stop. In fact, it gets worse than she could’ve ever imagined: her crumbling group of friends fall apart, her roommate turns against her, and Buffy finds herself trying to survive in a game built off her greatest nightmares.

I love writing because I’m compelled to do it, because it makes sense to me. It’s how I process, how I worship, how I communicate with the world around me.  I started “writing” in middle school when my friends wrote poems because they thought it was “cool.” But over time, I found writing as something that was my own and personal, and when a teacher told me I was a good writer, that encouraged me to become even more serious about it. As I began to discover my ASD in college, I realized that there are times that it’s very hard for me to be verbal. I became overwhelmed and overstimulated, and my first response was to write. It helped me calm down, as well as to find a way to improve how I communicated with others.

2. What are your favorite books, genres, and authors? Which ones have impacted you and your writing style the most?

I really love magical realism. Some of my biggest inspirations have been Japanese writers and writers of Japanese magic realism, like Haruki Murakami, Yasunari Kawabata, Shuntaro Tanikawa and Kelly Luce, as well as Studio Ghibli films. I add in Studio Ghibli because I think those films really taught me the power of silence, the power of slowing down the pace and taking a moment to pause. There are moments in Ghibli films, in the anime aesthetic at large, where there’s no music, no action, just a selah, a haiku moment between the audience and the environment. Maybe zooming into a flower or a bug, or a panoramic nature shot. As someone who writes both poetry and prose, this has definitely informed what I focus on in a scene, a moment, what details I care about and how I pace them.

I recently started working full time with the Association of Writers and Writing Programs, and teaching creative writing on the side. Before, I really just taught part-time, giving me more time to write. But I’m finding that right now, the full time job gives me a sense of urgency to want to make the time to write, while before I was procrastinating a bit…

4. Your YA debut novel Post-High School Reality Quest is not the average novel; in fact, it infuses the basics of the traditional storyline with the format of a text adventure game! What inspired you to write your book in the form of a text adventure? Could you describe to us both the benefits and the challenges of utilizing this idea?

So it started with a friend casually saying “you should write a novel in the form of a text adventure game.” I tried it on a whim one day and found out I actually really enjoyed doing it! The benefit is that it naturally created tension between two voices: the parser and Buffy (the player), so it was very fast and easy to draft. It allowed me to view the story from a different lens–so I had initially written a very crappy draft of a story about these nerdy friends who all played RPGs in Merrill’s basement and shenanigans ensued. But nothing really happened. So the text parser perspective allowed me to view everything in a new way, and give bones to the story. As for challenges, I think the biggest one was to convince people, “Hey–it’s in second person, but it’s OK!” Personally, I found it a blast to write, but it breaks one of the sacred writing classroom rules, so it can be hard to adjust to.